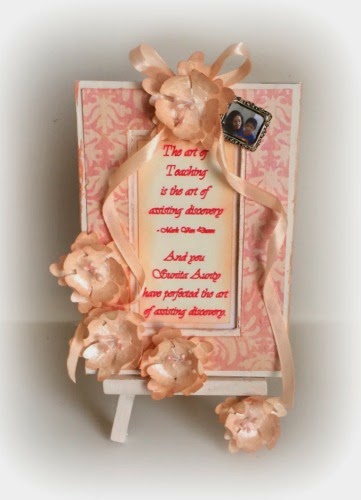 The thing about craft is that it’s a great way to gift something special to someone special. But after a while it starts getting monotonous… You can do cards, or gift boxes, or photo frames or an album or a notebook/ journal… then what? I was faced with exactly this question as I tried to create something for a very special teacher in my son’s school. She has been so fabulous with my son, bringing out the very best in him and I wanted to give her something really special but as always, I ran out of ideas. I was going to do a photo frame (again) and then as I was making it, I suddenly thought – what if I slip in a meaningful quote in the frame so that it becomes a keepsake for this wonderful lady. Voila! A new crafty gift idea was formed!!! As always the fabulous supplies at ItsyBitsy came in handy. I found a wooden easel with a small canvas. I covered this easel with white Gesso and then proceeded to tinge it the Tattered Rose Distress Ink. I have to admit, the ink barely stayed on the Gesso but after much effort, the easel finally got a pink tinge. For the frame I took some grey chipboard and again covered it with white Gesso. I inked the edges with the same shade of distress ink and covered it with some paper from the DCWV Luxury Stack. I embellished the frame with some hand made flowers using the Sizzix Sizzlits Flower Layer Die and more paper from the DCWV Luxury stack. The flowers coordinated perfectly with pattern paper since it was from the same stack and fortunately I found ribbon that matched as well! As a final touch, I took a tiny picture frame Blue Moon charm and slipped in a picture of my son and this extremely special teacher. I love this little addition. I was going to use the same photo for the centre space when it was going to be a photo frame but this way it doesn’t dominate the gift. It’s a small little accent for the side.
Finally here’s the quote I used
“The art of Teaching is the art of assisting Discovery.”
I added a little sentence after that saying “And you Sunita Aunty have perfected the art of assisting discovery”.
Supplies Used:

WE ARE AMONG TOP 100 CRAFT BLOGS ON THE WEB 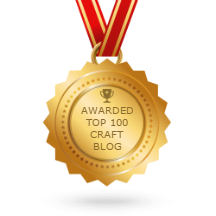